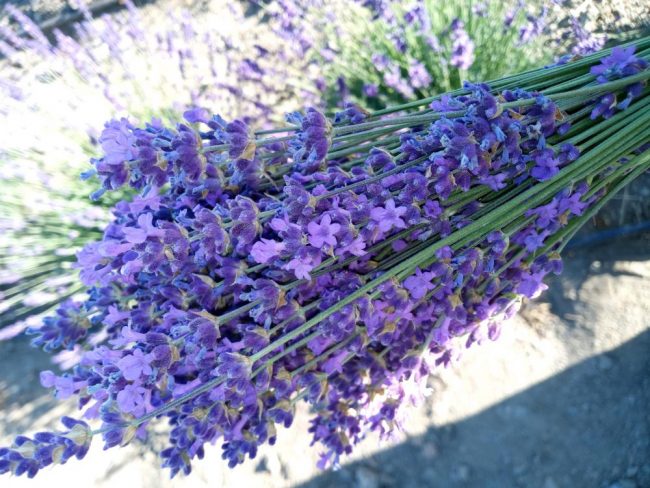 When do you harvest lavender? That depends on what you’re going to do with it. Most lavender oil these days is made of lavandin. That’s a pity because only lavandula angustfolia has the soothing properties for which lavender is so famous. This ‘real’ lavender was already in bloom in May. Halfway June a lot of flowers opened already.

Time to harvest lavender depends on your goal

The real lavender, lavender angustfolia, blooms earlier than lavandin. At the moment of my first lavender harvest – mid June – the lavandin only begins to form a few colourless flowers.

With some of the flowers already opened I decide to harvest some. My goal is to make essential oil. For a big lavender farmer it is difficult to determine the right moment of harvesting, I suspect.

Not all flowers are at the same stage of development. Even within one and the same plant there are flowers that are much further ahead than others. On my small lavender farm it is not (yet) a problem. I harvest the ripe flowers and leave others standing.

The advantage of this is that I can enjoy the blossoming lavender for a very long time and that the bees don’t pass by for nothing either. I also suspect that more flowers will come through. Pruning makes them bloom. In any case, I will continue to harvest for a long time. Some species remained in bloom last year until well into October.

What is the best time of day to harvest lavender?

According to Virginia McNaughton’s lavender growers guide, it’s best to harvest early in the morning. When the dew has dried, but before the heat. Harvesting lavender in small production also has an advantage here. In small quantities it is possible to harvest as much as possible in the morning, while large producers have to harvest all day long.

Harvesting just in the morning is fantastic. The sun is low, it’s not warm yet. And the bees, like me, are busy harvesting. The beautiful view and the smell of lavender; these are the best days of the year.