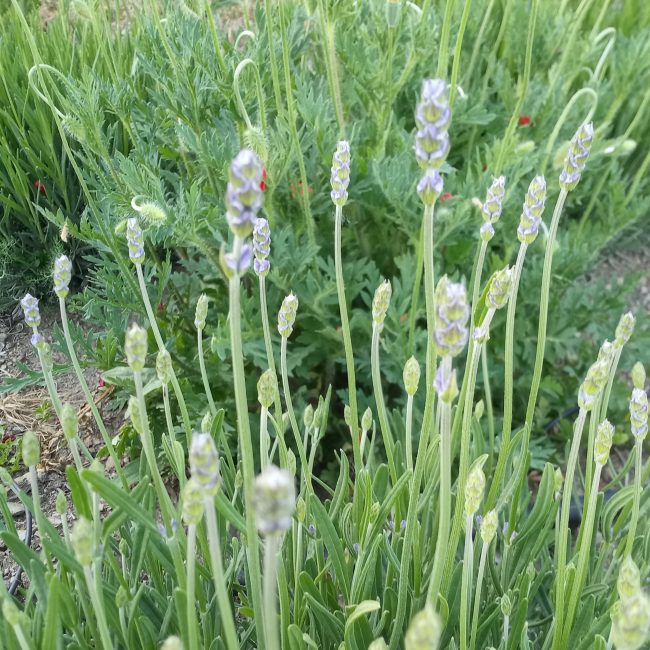 In France, lavender flowers from mid-June to mid-July. This is when large fields of mostly lavandin bloom. But did you know that true lavender – Lavandula angustfolia – often flowers already from May? Our lavender garden is at 1200 metres in Andalusia, Spain, and here the lavender is already in bloom. I can imagine that lower down the lavender blooms even earlier. Flowering season has started!

When does real lavender bloom?

Some species of true lavender, Lavandula angustfolia, flower from May to October.
For me, the first lavender to flower is Melissa Lilac. And the hidcote blue is in a hurry too.
Today, on 13 May, the first lilac flowers are already clearly visible. And the Lilac just keeps on flowering. From May to October. The first harvest for lavender flowers in bouquets is mid-June. And two weeks later they are ready for sale on Etsy.

When does lavandin lavender bloom?

The lavandin flowers later and for a shorter time. When I harvest the first real lavender, most of the lavandin is not yet in flower. I have lavandin Provence, lavandin Grosso and a very special lavandin called Heavenly Scent. It is a lavandin and has the production of a lavandin but it looks more like a real lavender, and the scent is sweeter than that of the other lavandins.

What is the difference between a true lavender and a lavandin?

The lavandin (Lavandula x intermedia) is a hybrid and is a cross between Lavandula augustifolia and Lavandula latifolia. The lavandin is not as calming and smells stronger and less sweet than the real lavender. Most French farmers have switched to lavandin because the plant produces many more flowers. There is also more yield of essential oil from lavandin than from real lavender.

Why do we have real lavender and lavandin?

We started with lavender because we were looking for a way to maintain our land at the foot of the Sierra Nevada in a sustainable way. Inspired by Commonland, we found in lavender an opportunity to manage the land sustainably and make money from it. Something that is often difficult on the small scale we wanted.

I love the different varieties of lavender and lavandin. Planting many different varieties extends the flowering season and benefits the bees. I’m not sure, but it seems the bees don’t care whether it’s lavender or lavandin. They love them both equally. With the wild flowers that we deliberately leave around our lavender garden and that are abundant in the Sierra Nevada Natural Park that we are just below, the bees have enough pollen to forage throughout the season. This spring we make a picture every day of a wild flower. See them on here.