✔Handmade products from Spain, good for you & nature  ✔Free gift service  ✔Shipping within the EU   ✔Free delivery from 35 euros 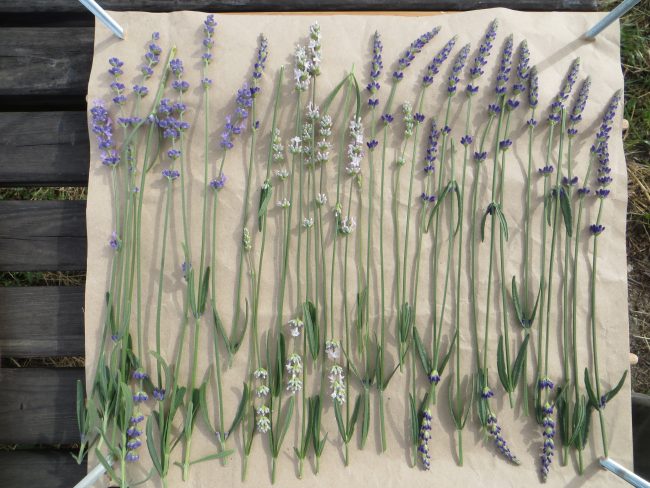 Making a lavender flower press can’t be that hard, can it? But I don’t know what works best for lavender. So now that the first lavenders can be harvested I thought it would be a good time to try it out. Because with a long lavender harvest season to go, I still have time to perfect the lavender flower press.

You can dry flowers between a book, but I think lavender needs a bit more pressure. I’m going to see how the lavender holds up between two shelves that I press together with screws and wing nuts. Often several layers of flowers are put on top of each other with cardboard in between. I’m not sure how that will work and I’ll just start with 2 planks of wood.

lavender flower press made from 2 bookshelves

I have a whole box of planks available from an old cupboard, the plugs are still on them. If it goes well, I will stack more planks on top. The screws are long enough.

In this way making a lavender flower press is a very simple job. I need two shelves (in my case) and four screws with wing nuts. At least I think so. The shelves are quite large, 40 x 44 centimetres. That’s good because I can dry whole lavender flowers with a long stem, but I don’t know if 4 pressure points are enough. I drill 4 holes in the corners and attach the screws. I cut two sheets of paper to the size of the flower press.

Then it’s time to harvest the lavender

I choose the first three varieties that are flowering. The Lilac Melissa, Melissa white and the dark blue Elisabeth, even though it has only just started flowering. I consciously choose to combine flowers that are further into flowering with lavender that is still in its early stages of flowering. I am curious to see what will look best later on. With a bit of fitting and measuring, 38 lavender flowers fit on the lavender flower press. That’s a bit disappointing. I have harvested considerably more. Of course, if you choose short stems, many more flowers will fit between the press. The remaining lavenders are used in a new dried bouquet.

After a week, I will replace the paper. And then a few more weeks and the flowers should be fine. I promise myself not to look more often than once a week. I will share my experiences here.

If you want to dry lavender in bunches, look here